The Bands and Music

The State Ceremonial Musicians of the Bands of the Household Division has a long and prestigious history; the bands are an iconic part of British national heritage.

The State Ceremonial Musicians can be routinely seen performing music for the Changing of the Guard ceremony at all the Royal Palaces and Castles, State Visits and Guards of Honour, moments of National Celebration, as well as moments of Nation Commemoration and Remembrance. Resplendent in red tunics and bearskin caps of the Foot Guards, or the State Dress of the Household Cavalry, the Bands of the Household Division provide the very finest, most stirring and moving performances of music.

Drawn from British Army Music, the State Ceremonial Musicians of the Household Division each serve in one of 7 Regimental Bands or in the string orchestra: Grenadiers, Coldstream, Scots, Irish and Welsh Guards of the Foot Guards Bands, the Household Cavalry Band, which includes musicians of both the Life Guards and Blues and Royals, and the Countess of Wessex‚Äôs String Orchestra.

The Bands may be accompanied by the Corps of Drums of each Regiment. The Scots and Irish Guards have pipers who play distinctive tunes on their bagpipes.

Music played during the guard changing ceremony has always been a mixture of traditional and popular music of the day. It is said that on one occasion in 1920, the Band was playing a piece from a popular Operetta when a footman arrived with a message from King George V, addressed to the Director of Music. He excitedly read the note only to find that it said: ‚ÄúHis Majesty does not know what the Band has just played but it is never to be played again.‚Äù

For Changing the Guard, a full Military Band is provided, usually from one of the Guards Regiments, accompanied by their Director of Music. It performs a variety of music during the handover, ranging from traditional military marches to songs from shows and even familiar pop songs.

Click Here to find out more about State Ceremonial Music 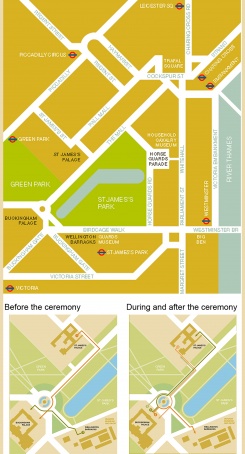