Origins of Trooping the Colour

Regimental flags of the British Army were historically described as ‚ÄòColours‚Äô because they displayed the uniform Colours and insignia worn by the soldiers of different units. The name ‚ÄòColour‚Äô continues to be used to this day. The principal role of a regiment‚Äôs Colours was to provide a rallying point on the battlefield. This was important because, without modern communications, it was all too easy for troops to become disoriented and separated from their unit during conflict.

If Troops were to know what their Regiment‚Äôs Colours looked like, it was necessary to display them regularly. The way in which this was done was for young officers to march in between the ranks of troops formed up in lines with the Colours held high. This is the origin of the word ‚Äòtrooping‚Äô. So, what today is a great tradition began life as a vital and practical parade designed to aid unit recognition before a battle commenced.

The Guards are amongst the oldest regiments of the British Army and have served as the personal bodyguards of The Sovereign since the monarchy was restored after the English Civil War in 1660. The ceremony of Trooping the Colour is believed to have been performed first during the reign of King Charles II (1660 ‚Äì 1685). In 1748, it was decided that this parade would be used to mark the official birthday of the Sovereign and it became an annual event after George III became King in 1760.

Today, this colourful spectacular remains a celebration of the Sovereign‚Äôs official birthday. Although Her Majesty The Queen‚Äôs actual birthday is the 21st April, her ‚Äòofficial birthday‚Äô is marked by the Trooping the Colour ceremony. 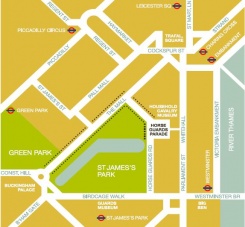