Traditions surrounding State Opening and the delivery of a speech by the monarch can be traced back as far as the 16th century. The current ceremony dates from the opening of the rebuilt Palace of Westminster in 1852 after the fire of 1834

The State Opening is a royal ceremony of great antiquity ā€“ well-established by the late fourteenth century ā€“ which marks the start of a parliamentary year. It is customary for the Sovereign to be present at the ceremony, which serves as a symbolic reminder of the unity of the three constituent parts of Parliament: the Sovereign, the House of Lords and the House of Commons.

The broad outlines of the ceremony have remained largely unchanged for centuries: a procession by the Sovereign to the Palace of Westminster is followed by the assembling of the Members of both Houses, and the reading of the Speech. Within these outlines, however, there have been adaptations and innovations. For example, from its origins until 1679, the ceremony was usually preceded by a mass at Westminster Abbey, but this was discontinued during the reign of King Charles II for fear of assassination plots. To take another example, Sovereigns in the 16th and 17th centuries used to process to Parliament aboard the Royal Barge on the River Thames.

The modern state opening ceremony dates to 1852, when the new Palace of Westminster was opened.Ā  The route within Parliament that Queen Elizabeth II follows today was used by Queen Victoria for the first time in 1852.Ā  And the Irish State Coach which the present Queen rides in today was bought by Queen Victoria and used for the first time in 1852.

Famous for its magnificent pageantry and precise choreography, the State Opening is also when the Queen reads the Speech from the Throne, which sets out the Governmentā€™s agenda and key legislative plans.

Queen Elizabeth II has opened ParliamentĀ all but two times during her reign. The exceptions were in 1959 and 1963, when she was pregnant with Prince Andrew and Prince Edward.Ā  The ceremony has changed very little throughout her reign. 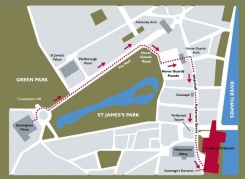