The Queenā€™s Life Guard isĀ conducted by soldiers of the Household Cavalry Mounted Regiment at Horse Guards. Horse Guards is named after the troops who have mounted The Queenā€™s Life Guard here since the Restoration of King Charles II in 1660. Every weekday, whatever the season or weather, members of the Household Cavalry Mounted Regiment ride down from Hyde Park Barracks in Knightsbridge to take over guard duties at 11:00am for the next twentyā€“four hours.

The Household Cavalry Mounted Regiment consists of a squadron from each of the two senior Regiments of the British Army: The Life Guards wear red tunics and white plumed helmets, and The Blues and Royals wear blue tunics and red plumed helmets.

On weekends, The Queenā€™s Life Guard remains in place at Horse Guards Parade, where the duty officer will inspect them at 1100am on Saturdays and 1000am on Sundays.

During most of the day the entrance to Horse Guards is guarded by two mounted sentries. After the duty officer has inspected them at 4:00pm,Ā all personnel, mounted and dismounted, will come off duty for the day.Ā

If you are coming to watch, please do take care of your personal possessions at all times. Ā As with all crowded places, pickpockets have been known to operate in this area. 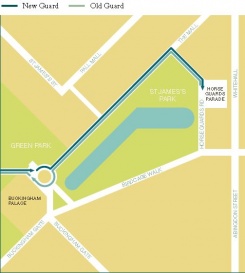