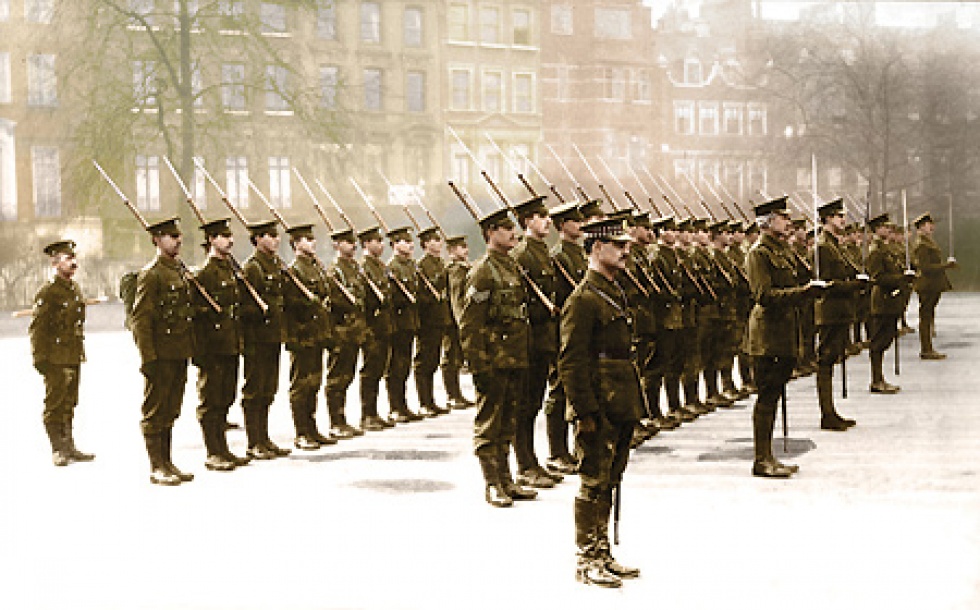 The 1st Battalion Welsh Guards mounts King‚Äôs Guard
for the first time, St David‚Äôs Day 1915,¬†
with many of its number recruited from the other Guards Regiments
Source:¬†Imperial War Museum

As the British Army began to expand at the outbreak of the great war, King George V readily agreed to a suggestion that the Principality should be represented in his Brigade of Guards.¬† The regiment was formed in February 1915 and mounted its first King‚Äôs Guard on St. David‚Äôs Day a few days later, wearing wartime khaki.¬†¬†

The new regiment was soon in France and Belgium amidst the horrors of trench warfare, earning their first battle honours, now proudly displayed on the colours.¬† On one occasion they returned from the front line for a rest period and found their newly-formed band waiting to meet them and lead them for the last two miles back to the village of Meault; quite a dramatic moment as these tired and exhausted men heard their regimental march,¬†The Rising of the Lark, for the first time.

The battalion began to wear home service clothing in 1920, and are distinguished by having the buttons on the tunic arranged in two groups of five, a leek on the collar and a white-green-white plume on the left of the bearskin.

During the second world war they formed part of the Guards Armoured Division and were among the first troops to liberate Belgium from occupation, something for which the Belgians continue to show their appreciation, having formed a special relationship with the regiment.

In April 1982 1st Battalion Welsh Guards was about to begin rehearsals for the Queen‚Äôs Birthday Parade but were instead despatched to the South Atlantic as part of the task force sent to liberate the Falkland Islands from hostile invaders. They suffered many casualties while about to disembark from the Sir Galahad at Bluff Cove, including the loss of 32 Welsh Guardsmen.

Her Majesty The Queen inspects
1st Battallion Welsh Guards at the
Presentation of Colours, 2015

Since then the battalion has been heavily involved in operations in Bosnia, Iraq and Afghanistan, alternating these deployments with their role at the heart of the great ceremonial occasions as the pride of the nation. Most recently, The Queen‚Äôs Colour of 1st Battalion Welsh Guards was trooped before Her Majesty in a unique parade at Windsor Castle on 13th June 2020 to mark The Queen's official birthday.