The word 'investiture' comes from the Latin word for dressing, or robing, in reference to the formal dress with which an incumbent being invested with a throne or a very high rank might be adorned, as part of the insignia for that role.

Music for an Investiture ‚Äď Tracks 1 - 7

An Investiture is the very special day when someone who has been awarded an honour receives their award in person from The Queen, or a Member of the Royal Family. The investee visits a Royal residence, usually Buckingham Palace, with members of their family, to receive their insignia. Investitures are hosted by The Queen, The Prince of Wales, The Duke of Cambridge and The Princess Royal.

Around 30 Investitures are held each year, and over 60 recipients attend each ceremony, either in the Ballroom at Buckingham Palace, or in the Waterloo Chamber at Windsor Castle. Investitures also happen occasionally at the Palace of Holyroodhouse in Edinburgh, or overseas during State or Royal visits.

The Queen, or Member of the Royal Family hosting the Investiture, enters the room attended by The Queen's Body Guard of the Yeomen of the Guard. The National Anthem is played, and then a military band or orchestra play a variety of music while the recipients are called forwards one-by-one, usually by the Lord Chamberlain. The Member of the Royal Family places the decoration on the person and congratulates them on their honour. Those who are receiving a knighthood kneel on an Investiture stool before The Queen to be dubbed. The sword with which The Queen dubs new knights belonged to her father, King George VI.

Captain Sarah Marinescu, Director of Music of the Countess of Wessex‚Äôs String Orchestra, one of the 7 bands of the State Ceremonial Musicians of the Household Division, which performs regularly at Investitures at Buckingham Palace, reflects about her role in supporting this special events: ¬†

¬† ¬†‚ÄúThe music selected for Investitures forms the background ambience throughout the ceremony and the repertoire performed includes a vast range of different musical styles and genres. It is carefully selected to reflect the importance of the occasion and to recognise the broad diversity of those in attendance.¬†

For a recipient of an award and their guests, an Investiture is a wonderful occasion. It is my great honour to select and prepare the music to be played at Investitures at Buckingham Palace, to conduct the musicians and through the musical performance, helping to make the memory of the day a very special one‚ÄĚ.¬† 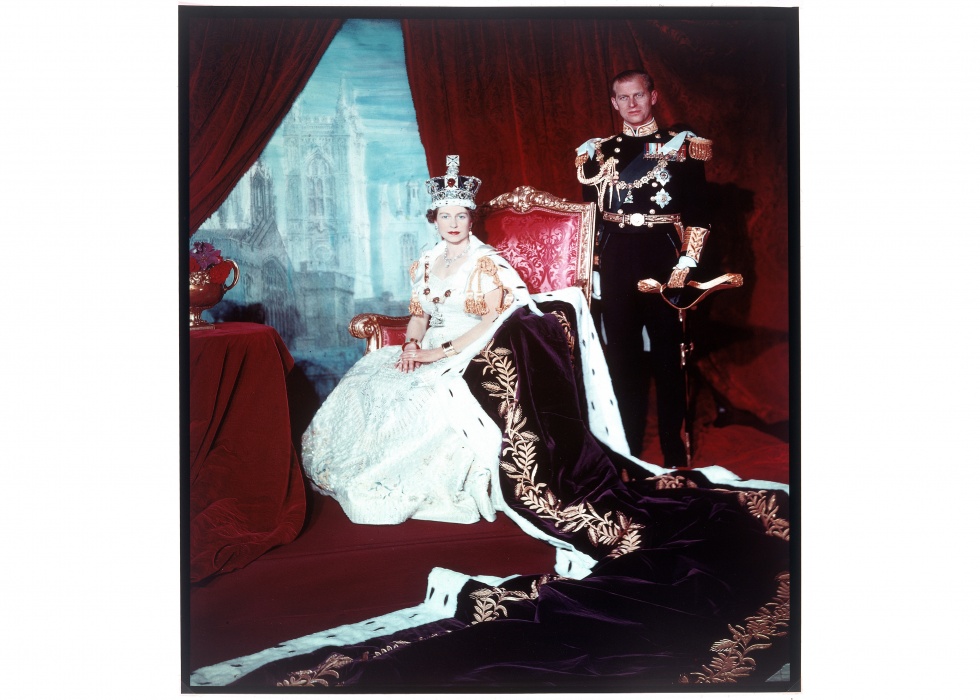 Her Majesty The Queen in Coronation robes with
His Royal Highness, The Prince Philip, Duke of Edinburgh,
photo Cecil Beaton.¬†

¬†A Note From The Composer

In February 2021, Regina has been created as A Musical Tribute to celebrate the Ninety-Fifth Anniversary of the Birthday of Her Majesty The Queen, Head of The Commonwealth, in the seventieth year of Her Majesty‚Äôs reign.

Regina is a composition in five movements:

Regina draws on symbols of State as sources of musical inspiration in the first movement, as well as more personal reflections on Her Majesty‚Äôs sense of grace and everlasting faith in the second and third movements.¬†

The fourth movement‚Äôs gentle musical depiction of a nautical seascape, pays a respectful homage to His Royal Highness The Prince Philip, Duke of Edinburgh, who has been ‚Äď in The Queen‚Äôs own words ‚Äď her ‚Äėstrength and stay‚Äô during her reign.

The Queen has ruled for longer than any other Monarch in British history. The final triumphal movement is a portrayal of Her Majesty‚Äôs seven-decade reign and as Head of The Commonwealth; a profound sense of magnitude, greatness and esteem for a much loved and hugely respected figure around the globe.